In May 2001, we moved from Vancouver, BC to the Bay Area in California.

Click on any of the animated gifs below to restart the animations.

We decided to truck the boat down, since May is not the best time to do the West Coast run.  We sailed across the border to Blaine, WA and decommissioned the boat there.

All deck hardware had to be removed due to height restrictions during transport.

Stripping the boat of its deck hardware (animated)

The yard in Blaine seemed to not be used to dealing with large sailboats, and we were on a time schedule due to tides for the mast removal and haulout. We were less than happy with the cleanliness of the facilities, and the manner in which the mast was unstepped. Only one sling point attachment was used below the first set of spreaders. This was not correct given the balance point and the mast promptly went horizontal as soon as it was removed, submitting it (and us) to unnecessary stress.

How not to remove the mast (animated). Note the unpleasant banana-like effect

The boat arrived at the Keefe Kaplan Maritime yard in Richmond, CA on May 14, 2001. There was some minor damage to the mast. It had slipped off its bracket during transport and the gooseneck had gouged a groove through the truck's fender and destroyed one of the tires. There was plenty of goopy rubber mess left on the gooseneck, but this was easily cleaned and there appeared to be no serious damage. As well, the masthead suffered some wear because we did not pack it correctly. 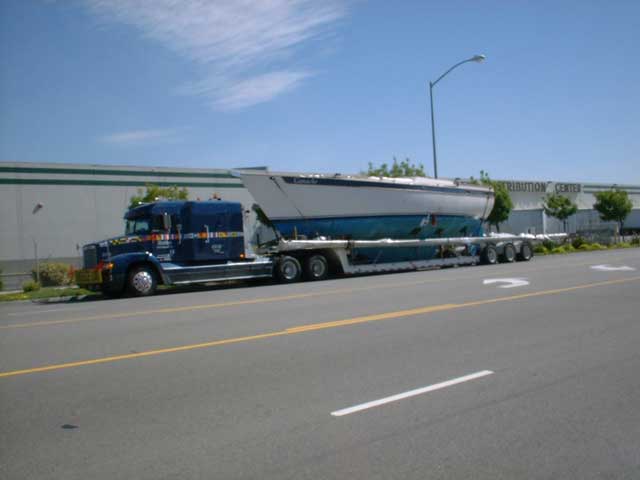 The KKMI yard was very clean and let us live on the hard there for almost a month while we redid our bottom paint and boot stripe, recommissioned the boat, stripped our cap and rub rail varnish, and had the yard do some needed repairs identified at survey time.

Boat goes back in the water (animated)

We put the boat back in the water in June and moved into Richmond's Marina Bay.This was the only marina at which we were able to find legal liveaboard accomodation.  I worked at Pixar Animation Studios in Emeryville and Guy set up his offices at the Ballena Bay Marina in Alameda, where we had hoped to eventually move. Alameda is sunnier and more sheltered from the prevailing winds than Marina Bay, which sits in the path of what's known as "The Slot". The Slot is the opening into San Francisco Bay under the Golden Gate Bridge. From late May, early June, until late August, early September, 20 to 30 knot winds blow through The Slot, sweeping the ever present fog bank in with them. We were cold.