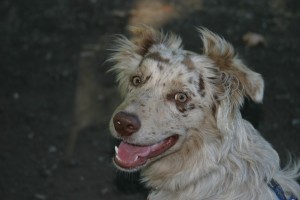 We brought Indy home with us on May 16, 2004. He's a purebred Australian Shepherd from Rafter MT Aussies in Aldergrove, BC.

He's a red merle with very little white - all four feet have some white, and he's got a small splotch on his chest. He got his name, Indiana Jones, because we were hoping he'd have some derring-do.

He was the same size as Diesel when he arrived, so that helped integrated him into the family somewhat.

He's a very smart dog but as he's not very brave, we sometimes like to fondly call him our "weenie dog". He was the least dominant dog in his litter but has come a long way confidence-wise from when we first brought him home. He's done several obedience classes and we may start him on agility or frisbee soon, when he's old enough to not affect his growing bones too badly.