The Risk of Deadheads

[2012/06: This post was ported over from Katrina's former blog on this same site]

Many people highlight the risks of floating logs when sailing in the waters of British Columbia or the U.S. Pacific Northwest. Booms towed by tugs often lose a few logs during the journey over water. One of the more insidious risks is that of the deadhead - a log that does not float horizontally in the water, but that is instead so waterlogged that it floats vertically. Often these deadheads are barely visible, peeking out from a wave trough every so often.

Deadheads are dangerous because they’re difficult to spot, and because they are quite heavy. A boat that is pounding up and down in the waves runs the risk of coming down right on top of a deadhead and being holed. Hitting a regular log isn’t as dangerous as the log will often glance off the reinforced bow, or roll underneath the boat. Sure, the prop can be damaged, but I’d rather take that over a two-foot hole in my hull any day. 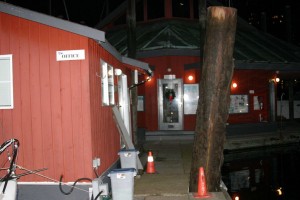 The sight of a deadhead floating through local waters is quite common. From the dock where we moor our boat, I see them at least weekly, if not more often. Late the other evening, when we went to walk the dog, we were presented with yet another dramatic example of how much damage a deadhead can cause.

We had a particularly low tide the other night. As our floating docks descended with the lowering water level, they got hung up on a deadhead that in turn had bottomed out in the soft mud of False Creek, so it was no longer free to float away with the tidal currents. 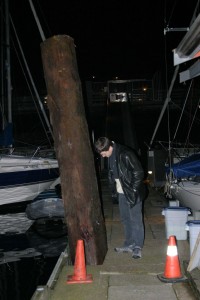 A few feet in either direction and the results could have been disastrous. As it was, when the problem was discovered, the concrete dock plates were bulging up, and the top of the deadhead was putting pressure on the electrical, cable, water and gas conduits that run underneath the docks and supply the marina. Five more feet to the west of where the deadhead settled lies the marina office. Thirty feet to the north lies the shower, laundry and lounge building. What ended up being a curiosity and nice phot-op could have been far worse.

When the tide finally rose enough to let the deadhead float free again, it was towed to the seawall and tied there to await pick-up.